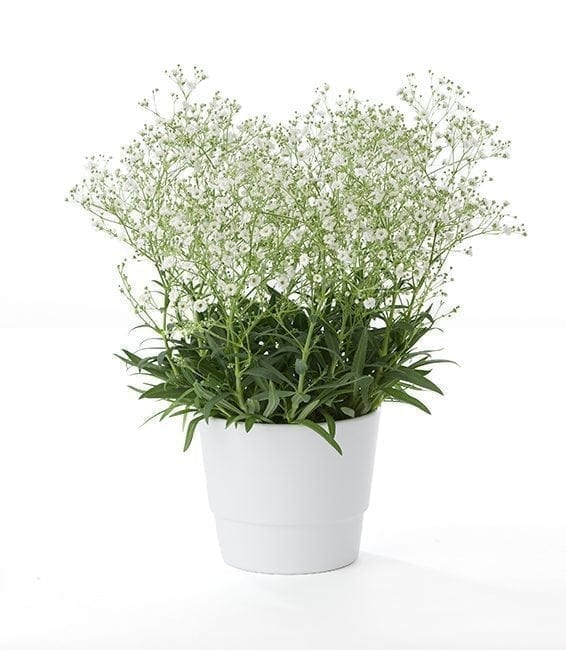 Researchers have made a leukemia breakthrough which has the potential to save thousands of lives a year – thanks to a tiny flower found in most flower shops and in many gardens.

Molecules from Gypsophila Paniculata – commonly known as Baby’s Breath – appeared in trials to break down the membrane of deadly cancer cells. This makes it far easier for antibody-based drugs to attack the cancer itself.

They found an extract from the white bloom can boost the efficiency of anticancer drugs by a factor of one million (1,000,000) times. Researchers working for Leukemia Busters made the discovery.

The Southampton-based charity was set up by Dr David Flavell and his wife Bee whose son Simon, ten, died of the disease. Dr Flavell said yesterday: “This could truly revolutionize the way these antibody-based drugs work and it will save lives. And there is a really big possibility this can be used for many cancers.” Scientists are now preparing for clinical trials, which will take three to five years.

Hibiscus flower extract may have the same health benefits as red wine and tea according to new research by scientists in Taiwan. Hibiscus contains antioxidants that help control cholesterol levels and reduce heart disease, say research in the Journal of the Science of Food and Agriculture.
Chau-Jong Wang and his team at Chung Shan Medical University in the Republic of China found that the antioxidant properties of flavonoids, polyphenolic compounds and anthocyanins contained in the Hibiscus flower can prevent the oxidation of Low-Density Lipoproteins (LDL), which is associated with the disease.

Hibiscus sabdariffa is used in alternative medicine to treat hypertension and liver disorder, and is used to make popular soft drinks in various countries across the world. Some health benefits of taking Hibiscus have now been verified: “Experiments have shown that compounds extracted from red wine and tea reduces cholesterol and lipid buildup in the arteries of rats. This is the first study to show that Hibiscus extract has the same effect”, says Wang.

In the study, rats were divided in to four groups and given different diets. After 12 weeks, the rats were given blood tests to assess their health. Results showed that the Hibiscus extract significantly reduced cholesterol in blood serum and successfully prevented oxidation of LDL.
The data suggests that the extract has potential to prevent cholesterol deposition and may therefore be useful in the prevention and even treatment of a number of heart diseases in which cholesterol plays a major role.

According to the Los Angeles Times, a study published in the Journal of Nutrition found that several cups of hibiscus tea a day can help lower blood pressure in people with mild hypertension.

A separate study in the Journal of Ethnopharmacology found similar benefits associated with drinking the tea.

The news provider reports that researchers in Mexico found that the red pigments in hibiscus flowers act like blood pressure-lowering medications called ACE inhibitors, which are some of the most widely pescribed hypertension remedies in the world.

According to TeaBenefits.com, Hibiscus tea contains a number of different antioxidants that may help to protect against cell-damaging free radicals. In addition to lowering blood pressure, it is often used to lower high cholesterol and strengthen the immune system.

Rose Hips and Their Amazing Benefits

Valued through the ages for its beauty and fragrance, subject of poets, symbol of femininity, gift of love… and so much more. And now scientists are finding that the hips from roses produce nature’s most effective anti-inflammatory medicine. What are rose hips? The little pod left behind after the flower has faded is the hip, the fruit of the bush. After the first hard frost kills the leaves and flowers on rose bushes, the hips remain and turn from green to bright red. At this point they are chock-full of Vitamin C and sought after to eat by humans and birds.

A number of exploratory studies have been performed with patients suffering from osteoarthritis, rheumatoid arthritis and lower back pain. The April, 2008 Journal of Ethnopharmachology reports a 7-day study in which rose hips were administered to assess its anti-inflammatory and analgesic effects in two animal models.

A single dose of hips produced significant anti-inflammatory effects on the induced animal injuries and swelling. Researchers also administered a dose as high as 87.6 grams of dried hips after which no acute toxicity was observed within seven days.

Osteoarthritis and Cartilage Society Research Journal, April 11, 2008 reports a meta-analysis of randomized controlled trials of a rose hip powder to estimate its effectiveness as a pain reliever on those suffering from osteoarthritis. Three separate studies were performed in all, involving 287 patients with a median trial duration of 3 months. 145 patients showed a reduction in pain scores from rose hip powder of .37 compared to the 142 control patients who received a placebo. The efficacy was consistent across trials.

In a study reported in the Phytotherapy Research journal, researcher’s objective was to investigate whether the clinically observed effects of rose hips in the treatment of osteoarthritis was due to inhibition of the cylooxyenase (COX) -1 and 2. Extracts of rose hips were tested for in vitro COX-1 and 2 activity, which was revealed at a significantly high level.

And a study from Inflammopharmachology reports that rose hip extract reduced chemotaxis of peripheral blood neutrophils and monocytes of healthy subjects in vitro. Daily intake of rose-hip powder for four weeks by healthy volunteers and patients suffering from osteoarthritis resulted in reduced serum C-reactive protein levels and reduced chemotaxis of peripheral blood neutrophils. The results showed that rose hips possess anti-inflammatory properties that allow them to replace or supplement conventional drug therapies in patients with osteoarthritis.

Marigold Flowers and Their Medicinal Properties

The Marigold (Calendula officinalis) has a long history of medicinal use; it is mentioned in many ancient herbals, including that of Culpepper, for use in the treatment of headaches, toothache, swellings and for strengthening the heart. As a medicinal plant, marigold has made its way into Egyptian, Indian, Greek, and Roman medicine.

During both the American Civil War and the First World War, Marigold was used to treat wounds and to prevent wounds from becoming infected with toxins and bacteria; the Marigold flowers were either made into a poultice or an infused oil for application on the wound.

Daffodils May Hold a Key to Curing Brain Cancer

Scientists have discovered narciclasine, a natural compound found in daffodil bulbs, may be a powerful therapeutic against biologically aggressive forms of human brain cancers.To make this discovery, computer-assisted techniques were used to identify targets for narciclasine in cancer cells. Researchers then grafted human melanoma brain metastatic cells into the brains of genetically altered mice. Results showed that the injected mice survived significantly longer when treated with narciclasine than those mice left untreated.

“We are planning to move a derivative of narciclasine toward clinical trials in oncology within a three to four year period in order to help patients with brain cancers, including gliomas, as well as brain metastases,” said Robert Kiss, co-author of the study from the Laboratory of Toxicology at the Institute of Pharmacy at the Université Libre de Bruxelles located in Belgium.

“Scientists havebeen digging in odd corners to find effective treatments for brain cancer for decades, and now they’ve found one in daffodils. It doesn’t mean that you should eat daisies or daffodils for what ails you, but that modern medicinal chemistry can pluck new chemicals from stuff that grows in the garden. This is a good one!” said Gerald Weissmann, Editor-in-Chief of The FASEB Journal.

A new research study has been published in the November 2010 print issue of The FASEB Journal .

Your Cart
0
We use cookies to ensure that we give you the best experience on our website. If you continue to use this site we will assume that you are happy with it.ACCEPTPrivacy policy
Go to Top